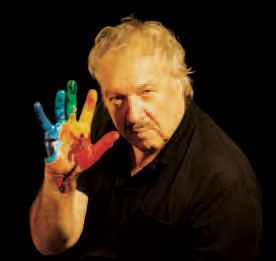 World renowned as an artist and sculptor, Lorenzo Ghiglieri has creations gracing the most prestigious museums and art collections around the world. His work is in The White House, Vatican, Kremlin, and the Royal Palace in Madrid to name a few, and his sculptures and paintings have been presented to Ronald Reagan, Al Gore, Mikhail Gorbachev, Pope John Paul II, Queen Elizabeth, and Luciano Pavarotti.

Lorenzo was raised in Southern California by his Italian sculptor father and French artist mother. He grew up in a world of ethnic blends that enriched his understanding of world culture. After receiving formal art training, he continued on his own to study the Old Masters.

At the age of 17 he was awarded a prestigious art scholarship. When he was 20 he was working on national accounts. And by age 22 he was commissioned to paint what became a gift from the United States to Great Britain for Queen Elizabeth’s coronation.

Over the next few years, Lorenzo won numerous national awards in design and illustration and, after a nationwide search, was invited to paint scenes for the international biblical epic, Earth: Theater of the Universe. During this two-year period of solid devotion, he produced a spectacular 100-foot rendition of Earth’s history according to biblical tradition that incorporated nearly 400 figures, most of which were posed and painted from life.

The result of his inspirations have thrilled thousands who have attended gallery and screen presentations of his work.