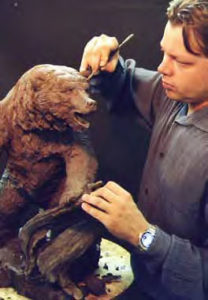 From the trenches of the marble quarries with Michelangelo to the expanding frontiers of America, the Legacy of the Ghiglieri name continues today with the prodigious sculptor and painter Laran Ghiglieri.

He follows in the tradition of his Great-Grandfather Battista Ghiglieri, who carved the regal marble lions that herald the edifice of the NYSE, and his Grandfather Angelo, whose colossal marble sculpture of a Franciscan Priest is located in Bakersfield, CA.

And most recently his prolific father Lorenzo, who, in the spirit of peace, presented his Holiness Pope John Paul II, the King of Spain, and former Russian President Mikhail Gorbachev with his conception of St. Francis of Assisi in bronze.

Laran brings his own unique sense of artistry that both complements his lineage, and allows his own vision to shine through in his work. His precision and attention to detail make his sculptures and paintings stand out among other artists. He began creating master works when he was only eleven years old, and under the guidance of his father, has collaborated, created, and co-produced hundreds of paintings and sculptures, including contributing to many spectacular monuments throughout the United States.